Breadfruit Run Down or Breadfruit Oil Down is stewed in coconut milk and makes a delicious meal for any day of the week.

Trinis call it oil down and people from Dominica and Jamaica call it run down. People from Grenada also call it oil down and there it is known as their national daish. I’m not sure what other Caribbean islanders call it. Basically, the main ingredient is simmered in coconut milk. Breadfruit is one of the most common varieties of oil down and is usually made with dried salted cod with pickled pig tails or smoked ham hocks. In Dominica, Rabbit Run Down is one of the most common varieties.

I cannot tell you how much I detest pig tails. I may be of Caribbean heritage, but there are some things that my American born sensibilities control and unlike most Caribbeans, I don’t like eating tails, ears, tongues, knuckles, feet and all those prized items that they consider delicacies. I think this stems from slavery times when the leftover animal parts were all that were given to the slaves and since that was what they received, why not embrace it? Well, thankfully, I was born a century later and don’t feel the need to eat those animal parts when I can just easily eat the main animal parts.

Souse, for example, is a prized dish. It consists of all of these unusual animal body parts (mostly pigs feet) cooked for a long period of time with lime juice, hot pepper and other spices until it turns almost gelatinous. I remember going to summer barbecues and a long line forming by a big stock pot and the reason was always souse. Some considerate family member would bring me a cup and not wanting to be rude I would smile politely and say, “Thank you.” Then give it to my sister or some cousin who would relish it.

However, smoked ham hocks I don’t have a problem with but since my Mom was always quite health conscious – she is a nurse after all – our family version was made with smoked turkey wings instead. Instead of using pickled pig tails, we use smoked turkey wings for a version that is a lightened up version than the classic Run Down. This version is not only healthier, but also plays into the American side of me, sans the pickled pigs feet….eeeew.

Is Breadfruit a new ingredient for you? It’s now becoming more easily available – at least here in the NYC area. Check out some of my other breadfruit recipes if you’d like to experiment more with this fruit.

IN THE MAKING – HOW TO MAKE BREADFRUIT RUN DOWN 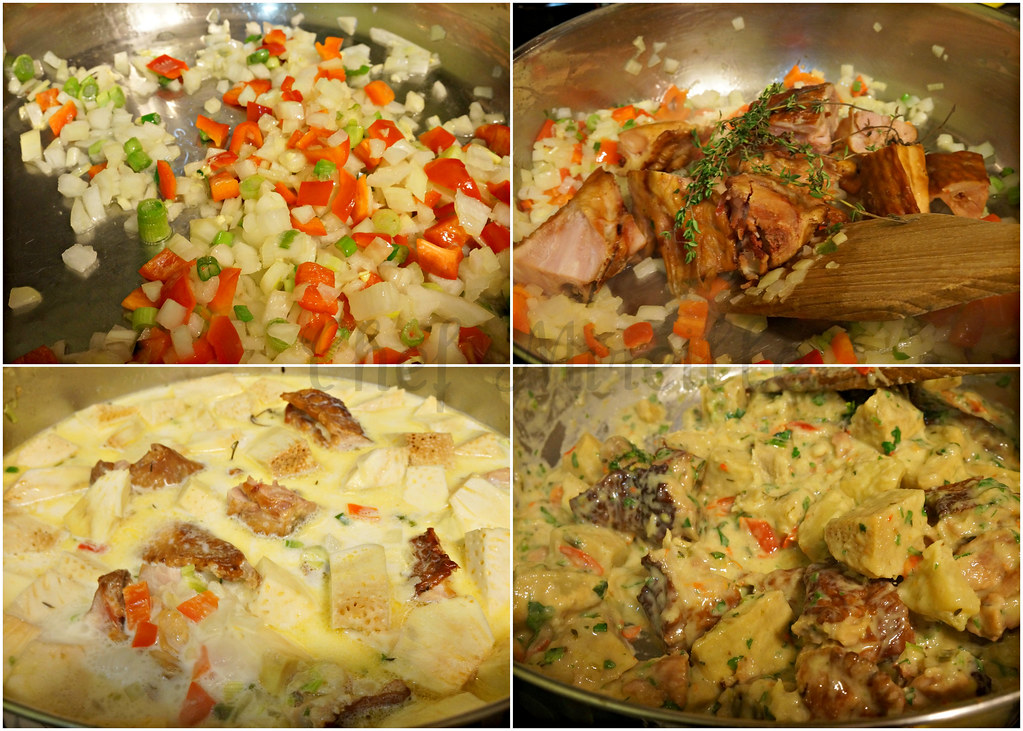 A complete one pot meal! 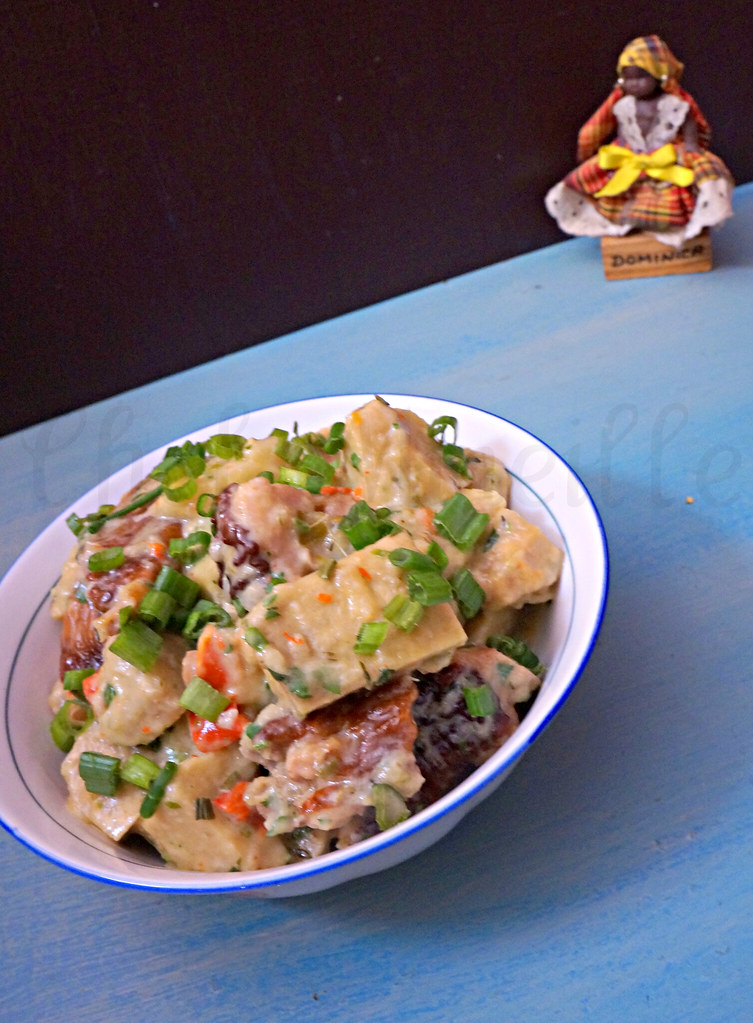 The meat here can easily be omitted for a Vegetarian version! 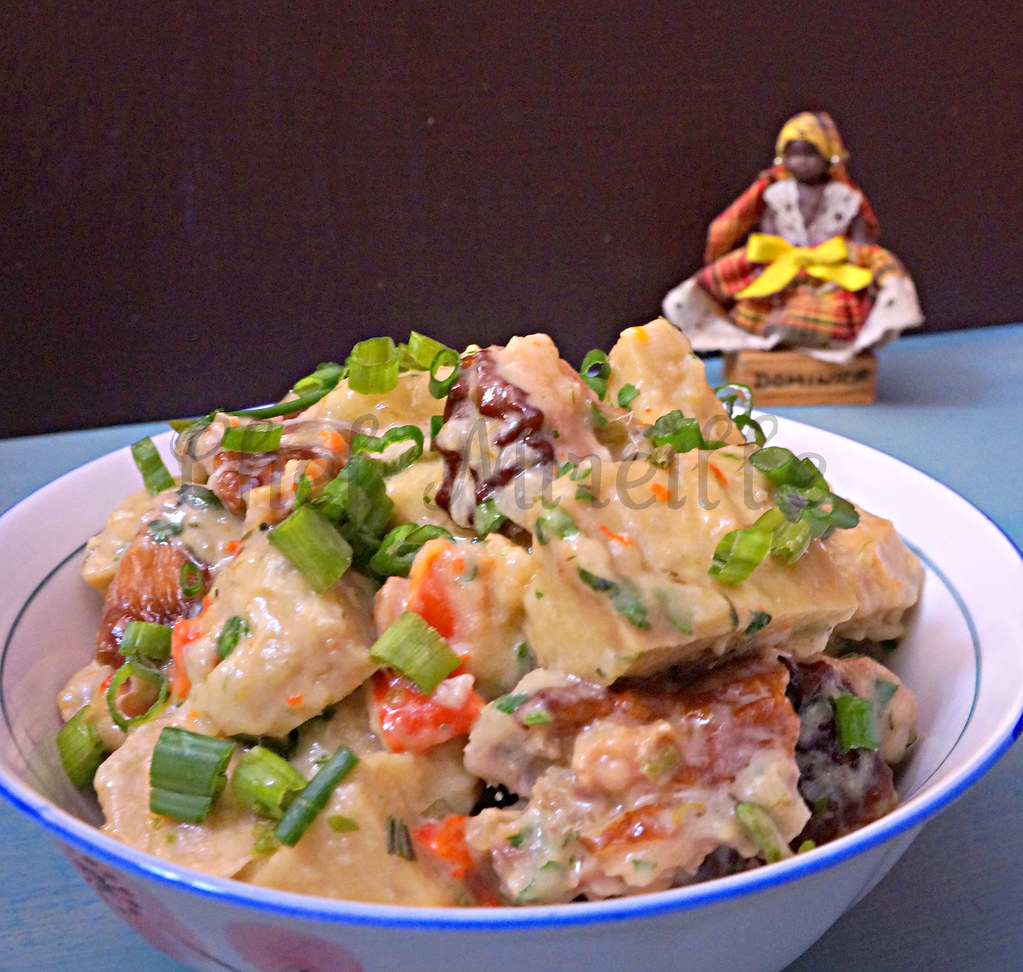 The smoked meat is salty, so be very careful not to add too much salt. Taste first to see if if even needs salt at all.
The Scotch Bonnet pepper is left in large halves so you can take it out as you desire. If you prefer it less spicy, remove the pepper halfway through the cooking time. If you have leftovers, I would suggest removing it prior to storing it in the refrigerator. If not, it will be much spicier the next day as the pepper continues to infuse the run down.
This can be made with either green or ripe breadfruit. Here I made it with ripe breadfruit, but if you are using green breadfruit the cooking time may be longer. You may need to add more coconut milk and/or water as needed until breadfruit is tender.