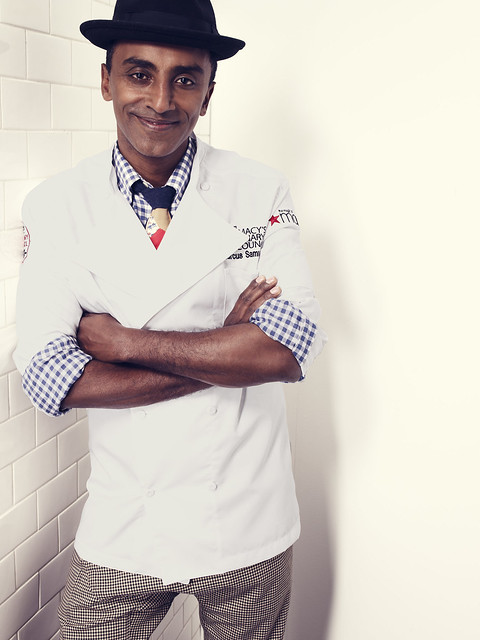 Marcus Samuelsson is one of my favorite celebrity chefs. Owner of Harlem’s famous Red Rooster here in NYC, he is a staple figure in the New York City restaurant scene, becoming one of the youngest executive chefs ever of Aquavit at age 24. Partially responsible for revitalizing Harlem and bringing downtown people up to Harlem for dinner, I am so excited to meet him on November 4th. Would you like to join me?

I had already planned on attending this event and then last weekend Anthony Bourdain’s Parts Unknown traveled to Ethiopia with Marc Samuelsson and is wife, Maya. It was one of my favorite episodes ever of the show, learning about Ethiopian culture and history from a native, but with an American perspective. For those of you who don’t know, Marc Samuelsson was born in Ethiopia. However, both he and his sister were adopted by Swedish parents when his mother died of tuberculosis. He has spent most of his adult life working and running restaurants in NYC. With his globally influenced cuisine, his food is totally in synch with my palate.

I am so excited to walk through a dinner with Chef Marcus Samuelsson as he shares stories from the kitchen and some of his favorite recipes. The best part? There will be scrumptious samples along the way! Plus, with any purchase of $35 or more in the Home Department, receive a $10 Macy’s gift card, and a copy of Marcus Off Duty, which he’ll sign for you after the event. Join me at this free event.

Marcus Samuelsson is no stranger to success. In 2003, he won the James Beard Foundation Award for Best Chef in NYC and Best International Cookbook in 2006. The bragging rights don’t stop there, either! In 2009, he hosted the first state dinner for President Obama. Raising the heat in the kitchen isn’t the only thing he’s accomplished. He raised $100,000+ for UNICEF’s tap project by winning Top Chef Master’s in 2010. Talk about a well-rounded chef!

Wednesday, November 4, 2015 – 6PM
Home Department, 8th Floor
Please RSVP at: marcusatmacyshsq.eventbrite.com
To learn more about the council and upcoming events, log on to www.macys.com/culinarycouncil. Follow us on Twitter @CulinaryCouncil.
Event subject to cancellation or change. *Purchase must be made on 11/4/15 at Macy’s Herald Square only. Gift card and book will be distributed 11/4. **One per customer, while supplies last. Macy’s gift card valid 11/4-11/11/15 only. ***While time permits.
—
About Macy’s
Macy’s, the largest retail brand of Macy’s, Inc., delivers fashion and affordable luxury to customers at approximately 800 locations in 45 states, the District of Columbia, Puerto Rico and Guam, as well as to customers in the U.S. and more than 100 international destinations through its leading online store at macys.com. Via its stores, e-commerce site, mobile and social platforms, Macy’s offers distinctive assortments including the most desired family of exclusive and fashion brands for him, her and home. Macy’s is known for such epic events as Macy’s 4th of July Fireworks® and the Macy’s Thanksgiving Day Parade®, as well as spectacular fashion shows, culinary events, flower shows and celebrity appearances. Macy’s flagship stores including Herald Square in New York City, Union Square in San Francisco, State Street in Chicago, and Dadeland in Miami and South Coast Plaza in southern California are known internationally and are leading destinations for visitors. Building on a more than 150-year tradition, and with the collective support of customers, employees and Macy’s Foundation, Macy’s helps strengthen communities by supporting local and national charities giving more than $70 million each year to help make a difference in the lives of our customers.

I am a member of the Everywhere Society and Everywhere has provided me with compensation for this post. However, all thoughts and opinions expressed are my own.