How to Fry Plantains – Making Fried Plantain – Learn how to peel and fry both green and ripe plantains!

Food is culture.  I am truly amazed sometimes at how little some people know about foods of different cultures, especially when you live in NY, and have access to foods from throughout the world.  I could not believe when a co-worker once told me she had never tasted a mango…I was in shock for the rest of the day!  Mangoes are not like some of the really unique products I use like blue corn flour…Mangoes are everywhere!  You don’t even have to process them yourselves.  They are sold already sliced up, in containers for you…everywhere from deli’s to street corner vendors.

Another shock came a few days ago when I was in the supermarket and a man was looking at plantain as though it were a Martian.  As he watched a woman pick some up to buy, he started asking her how to eat them and if you have to cook them.  She was Haitian and explaining to him how to make Banane Peze (a Haitian way of double frying plantain, dipping it in a vinegar solution, after the first frying). I then realized what I consider a common ingredient – plantain – is really foreign to some people.

In fact, I have a funny plantain story. I am half Haitian and one of my dad’s friends had married an American. This was many years ago before plantains were as readily available as they are today. She saw some plantain in the market and her husband had been saying how much he missed them. She was so happy to find them and she told her husband. As she’s putting the food out for dinner, he doesn’t see the plantain so he asks her. She tells him it’s in the salad. She had sliced it up RAW and put in the salad, not realizing you had to cook it first!

Plantains are high in potassium and Vitamin A, as well as carbs.  It’s a good vegetable to feed kids who are involved in sports, for a natural energy source.  This is why it is very common in tropical places, where much of the population does hard, manual labor.  Places like the Caribbean, Central America, Asia & Africa…it’s hard work working in sugarcane fields and this natural energy source keeps them going.

When you go to purchase plantains, you can find them at many different stages from green to yellow to black. Here’s the lowdown on which plantain to pick for what purpose.

Green Plantains – When picking green plantain, you want to make sure it is not starting to ripen at all. You don’t want any yellow, even at the ends. The worst plantain is when it’s neither completely green or yellow, but somewhere in between. This is between flavor doesn’t work in any plantain recipes.

Yellow Plantains – Depending on the recipe, you may want your yellow plantains to still be firm like in this recipe for Stuffed Plantains from India (Pazham Nirachathu) or to include in soups like this Ground Provision Soup. In these cases, the skin should be completely yellow, with some of the skin black but the plantain should still be firm. Sometimes you may want the plantain really ripe especially in sweet recipes like this Gluten Free Plantain Cake from India (Kai Pola) or these African Plantain Fritters from Ghana (Tatale). In these cases, you want as much of the skin as possible to be black. Don’t think that this is spoiled. It is not and is perfect at this time to be used in sweet presentations.

Usually you can buy green plantains and they will ripen to yellow. However, here in the US, sometimes plantains are picked too early and they don’t ripen. Basically, you have to experiment until you find a market with good plantains that will ripen naturally at home.

Yellow Plantains are easy to peel. Simply cut off the ends and peel almost like you would a banana.
Green plantains take a little more work. If you are boiling them, just do it in their skins. However, for frying peeling is necessary beforehand.
First cut off the ends.
With a small knife, score the peel of the plantain along the natural ridges in the skin.  Stick the knife under the skin on one end of the plantain.  With your fingers, go along the length of the plantain underneath the skin and the skin will pop off.  Repeat on the other sections until all of the skin has been removed.

Every Caribbean island makes Fried Ripe Plantain. It is a standard accompaniment to almost every meal. Simply peel, slice and shallow fry in oil until golden brown on all sides. 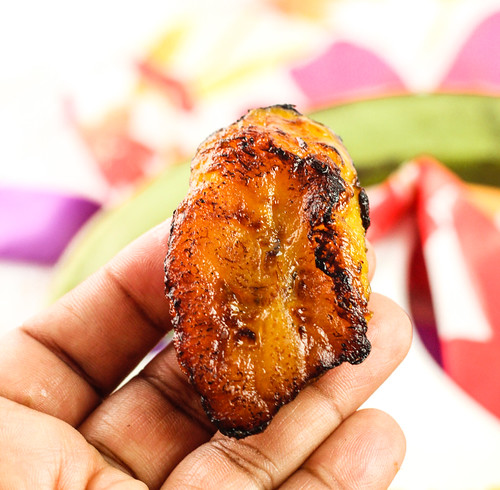 For Fried Green Plantain, it is usually double fried and not as common throughout the Caribbean, but only on some islands. On the Spanish speaking islands like Puerto Rico and Dominican Republic, it is called Tostones and usually served with a garlic sauce. To make tostones, the green plantains are peeled and then sliced into very thick slices. They are then shallow fried until a little golden on both sides.

A kitchen gadget called a tostonera is used to then flatten the slices. If you do not have access to a tostonera, you can also flatten by wrapping a heavy cast iron skillet with aluminum foil and pressing down on the slices to flatten them.

These flattened slices are then fried again in shallow oil until golden brown on both sides and crispy.

The Haitian version called Banane Peze is a little different in that between the two fryings, it is dipped in a vinegar and salt solution. This adds a little acidic tang that is super flavorful. You can check out the recipe here! 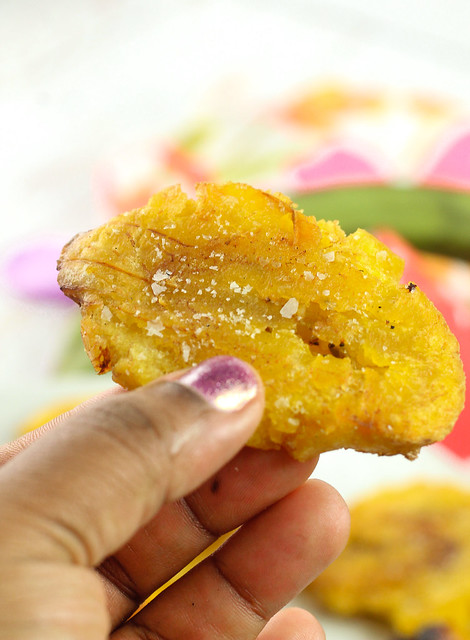 Do you like plantains as much as I do? You might also like to try the Indian version of frying green plantains – Balekai Podi. You can also slice the plantains very thin with a mandolin and deep fry in oil to make plantain chips, a popular Caribbean and Indian snack!

Some kids like sugar and some like salt..frying plantain is one of those versatile foods that every child will love…and now you have 2 ways of preparing them to satisfy every palate. 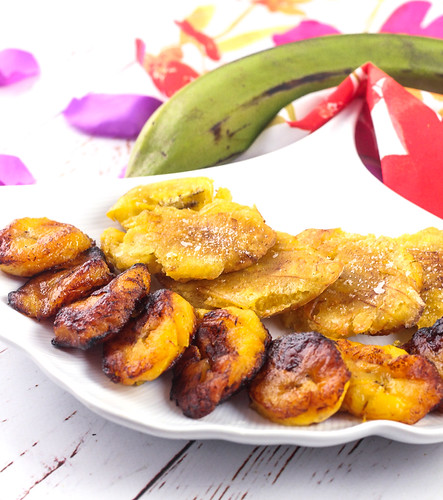 …and Srivalli’s Kids Delight hosted this month by Smitha

Want to add some more Caribbean inspiration into your diet? Check out all the other Caribbean recipes here from Aruba to Trinidad and Puerto Rico!