Koshari – Egypt’s National Dish is a Vegan One Pot Dish that has cost effective simple ingredients but is oh so flavorful, topped with caramelized onions.

This national dish of Egypt was very new to me. I had never heard about it, until I started doing research for International national dishes. In addition to being Egypt’s national dish, it is also a very popular street food. It is a flavorful, #vegan one pot meal.

This dish is so delicious but made with basic cost efficient ingredients. Who knew something this good can cost so little to make? There’s only one specialty ingredient in this dish – Baharat. Baharat is a spice blend used in the Middle East and North Africa. If you can’t locate Baharat, you can also substitute with Ras el Hanout.

I have recently started doing weekly Facebook LIVE cooking tutorials. If you are not following me on Facebook, do so here so you can get the notifications. I have mostly been doing simple recipes that are more assembly than cooking. This recipe involved a lot more electricity. With two electric skillets, two computers going,, my photography lights and a fan, my fuse got tripped. In trying to get everything back, my modem got turned off and it takes forever for it to reconnect. It was a comedy of errors. Even after resetting everything, my power strip wouldn’t work again.

Then the software that I use to do my Facebook LIVE was looking like a black screen. If something could go wrong, it was going to happen that day. However, I had promoted the fact that I was going online with that recipe, so I had to do something right – so I went on Facebook as soon as I could and did a quick video showing the prep and letting everyone know what happened and I would do an edited video instead. Having only done Tasty style videos before, this was brand new for me. Despite never doing it before, I set up my ipad propped against some books and did a cooking video. Sometimes what may seem horrible turns out to be something good. I have been wanting to start doing full on cooking videos, essentially producing a You Tube cooking show, but I have been procrastinating getting that started . Fear? Learning Curve? A little of both? Whatever the reason, this pushed me to take the plunge!

To other content creators, this is my lesson of the day – Adapt to the situation and it may just push you to develop a new marketable skill. Don’t be afraid of trying something new! So this video isn’t super slick and professional but for an ad hoc cooking video, it’s not bad and now I’ve gotten over the fear, I can prepare for this style of videos once I adjust my equipment better next time around. I’ll only get better as I develop the skill of producing and editing these cooking videos.

Regardless, you still get the most important thing – how to make Kposhari – Egypt’s National Dish Check out the video and I would LOVE it if you would subscribe to my You Tube Channel!

At least I got some new  photos of the dish after the ordeal! 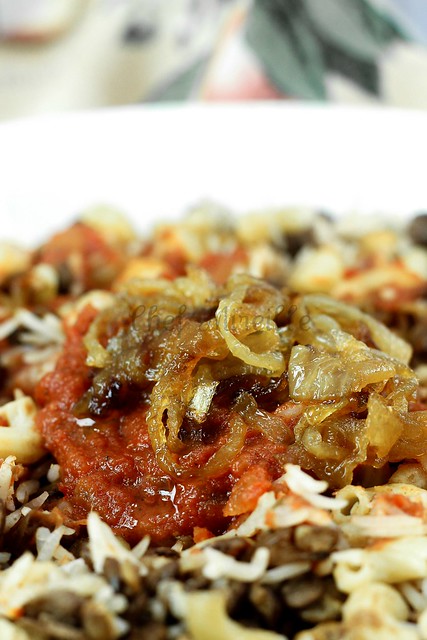 This vegan one dish is the National Dish or Egypt and one of the most popular street food faves. The caramelized onions make this so delicious!
Prep Time10 mins
Cook Time1 d 21 hrs
Total Time55 mins
Course: Entree
Cuisine: Egyptian
Servings: 6