These #glutenfree Indian fritters are from the little known region of northeastern Indian known as the 7 sisters, that comprise of 7 states with large tribal areas. They make a great appetizer or finger food to serve at parties!

This week I will be presenting recipes from the Northeastern states of India.  This is some of the lesser known cuisines, outside of India.  Part of the reason is that much of this region is still very tribal and therefore the globalization of their cuisine is virtually non existent.  Much of the produce consists of wild greens, not available in other parts of the world.

There are many differences between their cuisine and the rest of India.  One of the main reasons is that vegetarianism is not prevalent here, as it is in the rest of India.  Fish is especially prevalent, especially the use of fermented fish called Ngri.  It’s also the only part of India, outside of Goa, where pork is commonly eaten.  Due to its geographic location, vegetables commonly associated with Central  Asian cuisines are utilized here – like taro, bamboo shoots and lotus root. The two exceptions are Sikkim and Tripuri.  Sikkim consists of mainly Tibetan cuisine and Tripuri cuisine is largely Bengali.

All of the states of this region are big rice eaters in all its forms, but beaten rice is very common. Additionally, since this is where the tea plantations are, it is consumed in abundance here.

When I saw this recipe for Manipuri Fish Pakora, it reminded me immediately of Caribbean Fish Cakes, which is one of my favorite things, so I knew immediately I would try this regional Indian version. With a few adaptations, here is my version of Manipuri Style Fish Pakora!

All Pakora (Indian Fritters) are gluten free because chickpea flour (besan) is used instead of all purpose flour as is traditional in American/Western cuisines. If you are #glutenfree and would like to check out some other Indian fritters: 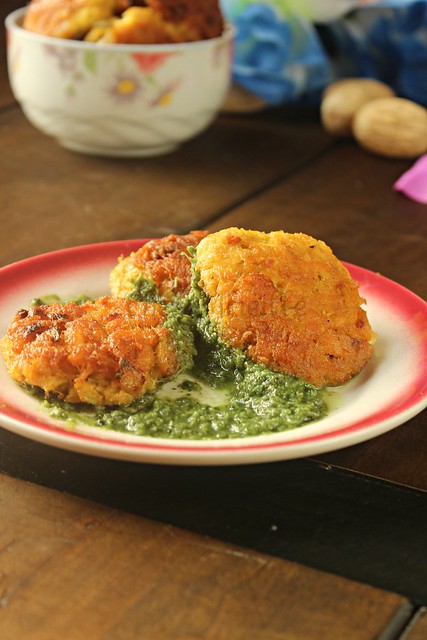 I share a lot of the food I cook with my Mom.  My Mom is not a foodie by any sense of the word.  She only eats because she has to in order to keep on living.  She does not get excited over trying new dishes or recipes, so I rarely get a call regarding any of the food I give her.  I don’t take it personally; food is just not something that interests her.

These fish pakora were a different story.  I immediately received a phone call and she asked, “What did you put in these fish cakes to make them taste so good?” I politely informed her that they were not fish cakes, but Manipuri Fish Pakora and after going over the ingredient list, we realized it was the addition of the besan that gave these a wonderful texture inside that she loved so much. 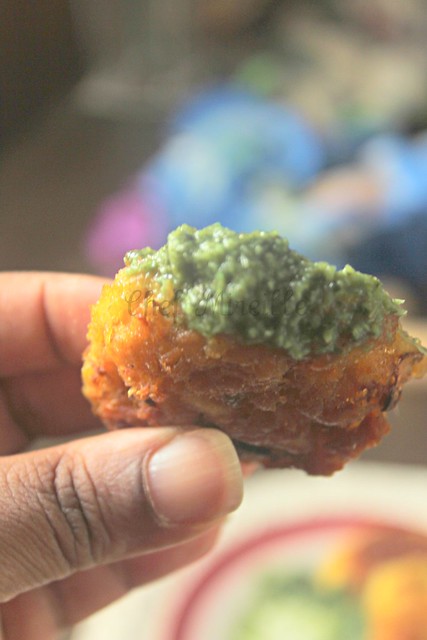 These came out so delicious.  Nice and crispy on the outside and light and airy on the inside.  This is definitely a recipe that I would repeat!