Sakkarai Bulgur Pongal – low fat version. This Indian sweet is one of many varieties of both sweet and savory pongal’s that are eaten around the festival of the same name. Pongal is a four day harvest festival celebrated in Tamil Nadu, Sri Lanka and other areas with large Tamil populations.

Before I even get started, let me first say this is a slightly non traditional version of pongal, but why not adapt recipes to out personal preference. Hope you like my version when you want to try something new,

Pongal is a harvest celebration in Sri Lanka and in southern India, specifically in Tamil Nadu. Pongal is not only the name of the festival but also the name of a food that is eaten not only during Pongal but throughout the year. Pongal, the food not the festival, can be made either sweet or savory and are usually grain based. When you see Sakkarai in the title, then you know it is a sweet pongal instead of a savory one. While rice is most common as the primary grain, there are also semolina (rava/sooji) and cracked wheat variations.

Here in the US, bulgur wheat is a lot more readily available. I used to use cracked wheat and bulgur synonymously but that is what is so great about the internet and the world of food blogging, you learn so much from others. They are actually not the same as bulgur wheat is pre cooked, therefore cooks much faster and requires less liquid than cracked wheat. People often comment how I am able to cook so many different cuisines. First of all, I am lucky to live in the global capital of the world where pretty much any ingredient is available, you just need to know where to look. Even cracked wheat I could have found, but if my pantry has a bunch of bulgur and they are so close in nature, why not utilize it?

Pongal occurs every year during the month of Thai in the Gregorian calendar. This year Pongal dates are January 14 – 17.  Let’s vicariously send ourselves to Tamil Nadu or Sri Lanka and partake in some Bulgur Pongal. It might help you think you are really there experiencing a different culture and cuisine. Imagine how much fun you are having! Too much wishful thinking? Well even if you can’t imagine yourself there, you can still enjoy this delicious dessert even if you are in NYC, albeit you are most likely freezing as you are eating it with the record low temperatures we have been experiencing for weeks now! Can you tell I am so ready for winter to be over!!!!

There are many variations of pongal. Here are just a few others you might like to try!

Although traditionally it is often made with liberal amounts of ghee, I skipped it and still loved this slightly healthier version without the ghee, although my version is less creamy. Yet it was still super delicious! 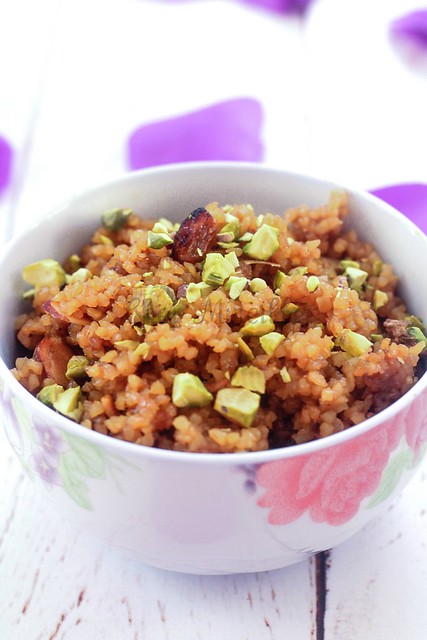 Cashews are more traditionally used but as I’m allergic other nuts were used in my version.